At the end of August 2021 I will be publishing a novel with Olympia Publishers entitled "JACKSON PENN, an Uncertain Boy". 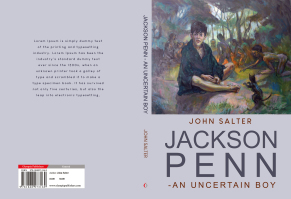 "The End of Joshua Penn

Jackson Penn excerpt: The end of his father

Jack shifted slightly his position against the tree stump inserting his folded jacket between himself and the rough bark. Dan had still not arrived.

Then his thoughts returned once more to his life with his father and a night nearly two months before, when he had clambered from his bedroom window, not wanting to risk meeting Joshua raging in the room below. He had also wanted to breathe the free air away from the stench of damp and whisky that enveloped the house and the probability of his mad father coming up to beat him. He had wandered down to the river and looking out across the Mississippi’s vast breadth had once more dreamt of escaping.

He began thinking of his now long-delayed intention of going west, to seek fortune in the goldfields and how he would descend the Mississippi down as far as the Missouri, which he would then mount until, once far out into the unorganised territories, he would find the trail to the goldfields. Could he persuade Dan to join him? But stealing a slave was a big crime and deeply offended what little of the Widow Wilson’s moral teachings had found a place in his thinking. It could even be a hanging offence; but then Dan was unhappy and did not want to be a slave — a thought that reassured Jack.

The Widow Wilson had begun to talk of selling Dan down south, now that Bill was big enough to look after himself and to take over some of Dan’s tasks. Thus, a generally good-natured Dan had become morose and sullen and there had been talk in the town of being well rid of him if she did sell him — particularly since he had got the Neilson’s maid in the family way. Everybody knew it was Paw Neilson who was screwing her, and no nigger had a right to take over a white man’s screw and now the Neilsons also had a maid who was crying and sulking round the house because she wanted to be with her Dan. Maybe it was not Dan’s kid any way. They would see when it was born, because the girl was almost uncoloured — a “high yaller” as they said in the far south.

Dan was the only remaining slave in the reduced Watson establishment, a semi-poverty brought about by the departure of Bill’s father gone to seek greater fortune in the gold fields in 1849. Dan’s wife and two small children had been auctioned off three years back, as had been his mother, brother and sister some years before when Dan was only seven. Dan, embittered by these experiences and further embittered by being in thrall to the tyrannical whims of Bill, was only awaiting the propitious moment to run away and seek his freedom. Dan had also recently heard that his wife and children had died in a cholera epidemic that had visited their southern plantation. So when Jack hesitantly suggested that he accompany him on his own escape to the west, this moment seemed to have arrived. His thoughts, like those of Jack, had turned to creating concrete plans of escape.

One night, when Jack was standing on the riverbank, thinking on his hateful father andfeeling relieved to have so easily escaped him, he noticed, rather belatedly, that the weather had changed. For some time there had been a faint rumbling on the eastern horizon accompanied by flickers of lightning. And now Jack watched a curtain of churning clouds advance rapidly across the starlit sky, creating a violent blackness as it came. Jack turned and ran towards the town, intent upon the refuge he had often used in times past when other refuges were not available —the church. The oncoming storm promised to be very violent. He had almost reached the church when the rain and wind hit him. He was angrily aware that he had not re-acted soon enough to stay dry that night and he cursed the weather that tore at his clothes and buffeted him to one side as he ran. On reaching the church he prised aside the rotting clapboard behind the tub that caught the rainwater from the guttering and squeezed into the interior. Once inside he sought out the Winston family pew, the most comfortable of all as it had cushioned seats; however, it was already occupied.

There was his father deeply lost in his drunken sleep, an almost empty bottle and whipping belt still at hand. His quest, finding where Jack was hidden, was long forgotten. There was an unpleasant smell — not only had he vomited in his sleep but shat himself as well. Again, Jack cursed. He would have to stay clear for a day or two if he didn’t want to have to help clean up Pap. The Winstons were not going to be very happy.

He went across to the Neilsons’ pew, which was far enough away to escape the smell of his father. This was equally large, so that one could stretch out one’s legs, but much less comfortable as it lacked cushions. He knew his father would be out for some time and therefore presented no immediate danger as his only thought on awakening would be to seek whisky. He settled down along the bench and began to consider going back to his bed for a few hours. He would wait, he decided, until the storm abated a little. Even though summer warmth pervaded the church, he shivered in his wet clothes. Outside, war had been declared. The old church shook beneath the cannonades. The thunder roared almost continuously, and the church was lit as if by a brilliant flickering candle that sputtered and flared with a sharp, cold glare. In one of the rare moments when there was no sound greater than the beating rain and wind, Jack thought he heard a movement. Perhaps it was his father wakened by the storm and so he raised his head. What he saw startled him.

There, indeed, was his father, but he was with a very big man. It was not anybody that Jack recognised. In the almost continuous light of the storm Jack had time to study the man’s high cheekbones and hooked nose, his blond hair, beginning to turn grey, his Indian dress and the enormous strength of his hands. With one of these monstrous objects, he was holding Joshua, still largely asleep, upright against the wall of the church by his neck. With the other he was evidently searching fastidiously his clothing. Why would anyone want to search through his father’s dirty, vomit-covered and shit-soaked clothing, Jack wondered. The scene looked like a robbery but then the filthy Joshua hardly had the air of someone with loaded pockets. Evidently failing in his search, the man savagely shook the inert drunk. He then looked around him. Jack ducked down into his pew but raised his head again as he heard the Indian-like man begin to drag his father down the aisle of the church. Jack saw them arrive at the stairs to the choir gallery; whereupon the huge man began to pull the inert body up the stairs by its legs, the head bumping on every step. By the time they reached the top Joshua was fully awake and he tried to sit up. It was obvious that it was only as he glanced about him that he became aware of his assailant. He gave a thin scream of fear and then started desperately trying to claw his way back down the stairs. The man still had him by one foot. By this he raised his struggling victim into the air without apparent effort and then, with the merest shrug of his shoulders sent him flying over the crude wooden balustrade to fall, a screaming bundle, headfirst to the church floor — where he lay silent.

At this moment Jack sneezed. It had been in the middle of a rolling clap of thunder; nevertheless, the man had heard him. Jack rushed for his hole in the clapboard, but the large man was very agile and caught up with him before he was halfway through and dragged him back. He took Jack by the throat, but then seeing the boy clearly for the first time, seemed to change his mind and pushing him from him, struck him a blow to the head that sent Jack rolling unconscious under the table that served as altar and Bible stand. Jack had been found there the next morning by the minister, with his father’s bloody scalp attached by a string around his neck.

This novel is a Historical  Adventure and Bisexual Romance. It started as an adult sequel to “Huckleberry Finn”, but then took off on its own wings. It follows an adolescent living in Antebellum America as he tries to escape a difficult and violent childhood by setting out for the gold fields with his great friend, an escaped slave, only to find his fate ruled by his father’s stolen treasure.

At first they are  embroiled in “Bleeding Kansas” as Free State and Slave State radicals clash in an almost civil war. This is followed by two years with an Indian tribe where he learns to kill and to love without remorse; then several months in the company of the radical Abolitionist, hero and rascal John Brown ending with the seige at Harper’s  Ferry where he loses his great friend but finds new loves; and, finally, in street fighting in the New York Draft Riots of 1863 before going West to try “roughing it” with his new friend a talented writer.

Alongside these adventures there is a study of a boy coming to terms with his social, sexual and racial identity and his varied and tumultuous loves. Beyond being a good story this book combats the hysteria of recent years, that has robbed the young adolescent of the right to consent, by giving a realistic analysis of an adolescent that deals with “forbidden truths”: for example, that “innocence” has nothing to do with not having sex and that “normal” adolescents are not necessarily entirely heterosexual and can be attracted by adults.

The Art of Painting is a form of communication that goes beyond spoken language in passing directly, on sight, to our understanding and emotions.

I speak to you through  your eyes and what I have to say is not necessarily very pretty:

I send you a vision of the world, my own, and if I'm a good Painter, it will give you another view of humanity and its environment.

Necessarily and at any time, I'm available to listen to you and to take into account your reactions. Therefore, if you find my work of interest, don't hesitate to make contact.